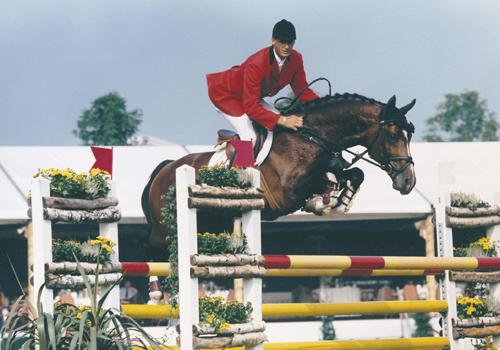 KWPN Horse of the Year 2015: Heartbreaker Seven horses were nominated for the title of KWPN Riding Horse of the Year 2015: SFN Zenith N.O.P., Heartbreaker, Kannan, Admara II, Glock’s Johnson TN N.O.P., Glock’s Undercover N.O.P. and Valegro. The title went to the preferent Heartbreaker, who was bestowed with this title for his influence on the worldwide jumping breedinghome the prestigious Nimmerdor Trophy.

As a young horse this Nimmerdor-son was already remarkably eager, with a fighting spirit and always super careful. He competed at the highest level with Peter Geerink and leaves his mark on his offspring like no other. His jumping abilities, reflexes, character and carefulness that he always showed in the course are now the trademarks of his children. In 2005 he was awarded with the keur predicate, four years later he was declared preferent.

His nine approved sons and 14 approved grandsons underline his influence on the Dutch jumpers breeding. However, his impact is not limited to the sire line. A great percentage of his daughters were awarded with the predicate ster, keur, elite or sport. At the moment, Heartbreaker is positioned sixth at the WBFSH-rankings for jumping sires, his grandson Cornet Obolensky is even in third place. If points would be awarded for being the grandsire or great-grandsire, he would lead this ranking to a skyrocketing height. The best jumper of 2015 is his grandson Hello Sanctos, who obtained the prestigious Rolex Grand Slam with Scott Brash last year by winning in Geneva, Aachen and Spruce Meadows. Through sire Padinus, Heartbreaker blood also flows through the veins of number two in the rankings, Admara II. The same goes for number nine in the rankings, Cornet d’Amour. The most remarkable own  son of Heartbreaker is Romanov, who won no less than three grand prix competitions and one world cup competition with Bertram Allen last year.

Despite turning 27 years of age this year, Heartbreaker’s influence on the global jumping top is still significant. And some are still on their way, as we can see from the good results of his grand- and great grandchildren on the World Breeding Jumping Championships for Young Horses. Grandson Early was world champion of the 5-year-olds in 2014 and did it again in 2015 by winning the title of the 6-year-olds. Other successful grandsons of Heartbreaker in this competition were the champion of the five-year-olds and the number four of the seven-year-olds: Harley VDL-son Davidson, who triumphed in the Isah Cup for 7-year-olds at the KWPN Championships in August.

More than enough reason to proclaim Heartbreaker as KWPN Riding Horse of the Year 2015. A lifetime achievement award for bringing name and fame to the KWPN breeding. The Nimmerdor Trophy – named after his legendary father – is awarded to his son Heartbreaker: 27 years old, but still as fit as a youngster, as he showed in his energetic appearance in the Brabanthallen.